No matter how much The Path denies it, there’s still a world beyond Britain – beyond the influence of their so-called glorious faith. 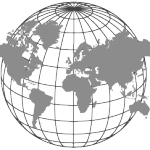 They deny it because they fear it – on two fronts: that it shows life is possible without them, and because it is a direct military and dogmatic threat to their existence, perhaps more so than even the Magdalenes. Even in Britain, we the Magdalenes fight against oppression, holding back the yoke of The Path on two major fronts.

Our losses have been heavy, but we hold on. When the Heralds of The Path starve whole towns, still we fight. When they burn us with chemicals or choke us with biological warfare, STILL WE FIGHT.

Our greatest fear: that The Path should defeat the Jericho Line and seize victory in the Northern Campaigns. Then their Holy Britain, bastion of their wicked dictatorship, will be complete. In The Path lies only misery, oppression and death.

We fight for all humanity – and we will bring down The Path. 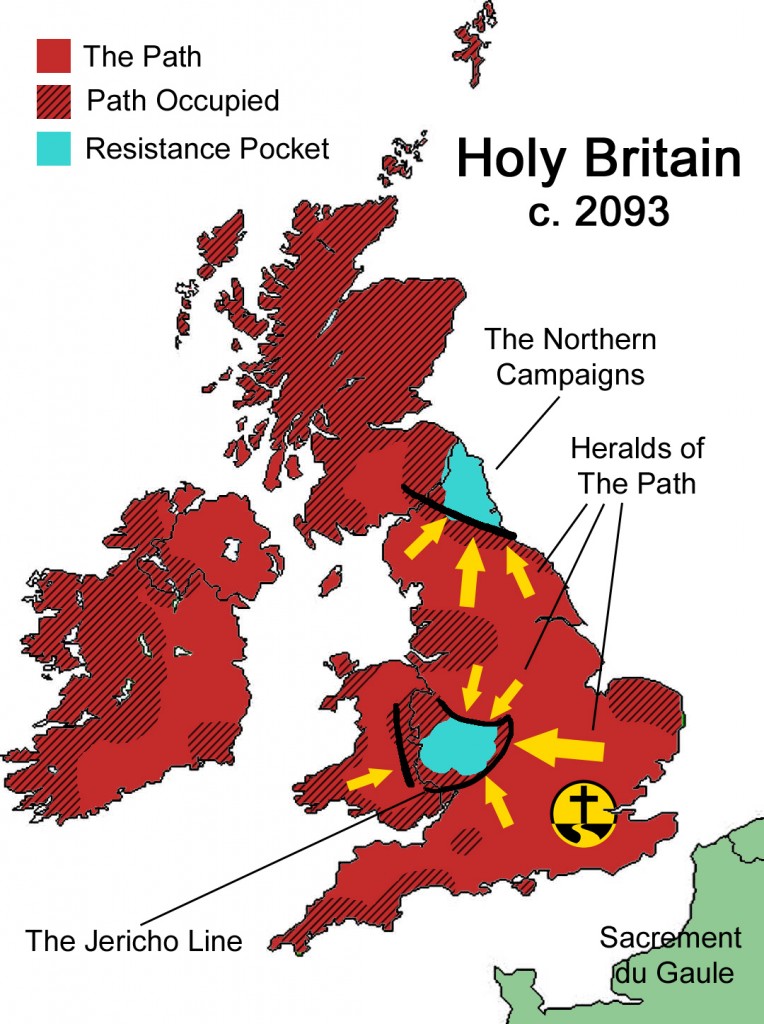 Holy Britain, c. 2093. The Path controls – either by devotion or occupation – the majority of the British Isles. All that remains of the once-strong Magadalene resistance are two islanded enclaves: The Jericho Line, and what The Path terms The Northern Campaigns.

Our Magdalene brothers hold a heavily-fortified rampart line around Birmingham to the former Welsh border, resisting the advances of the Heralds of The Path. It is here that Chaplain Richards launched his Dawn Offensive, exterminating 10,000 civilians stood in opposition to his army’s advances. Their resilience is admirable.

That we have held the Jericho Line as long as we have is proof of the sustainability of the Magdalene cause – proof which The Path are hell-bent on eradicating, along with us all.

Stone Cleaver, first of the Magdalene chapters to break away, have held The Path at bay in the Northern Campaigns since the Great Purges. Their toll has been savage. But still they fight, and find strength in their access to the sea, making the Northern Campaigns more protracted than the battles on the Jericho Line, and making of the northeast of England an enclave: a perceived safe-haven.

But all communication channels with Stone Cleaver have failed. And The Path won’t rest easy – soon they will strike, and wipe the Magdalenes in Newcastle and the northeast from Britain. Slowly, the forces of the Heralds of The Path are amassing against them unchecked. We fear a bloody slaughter.

We must act quickly, striking a lifeline to the rescue of our Northern brothers, or bringing down The Path outright. The fate of millions rests on what we can achieve in London and on the Jericho Line.

The world The Path denies

The world, c. 2093. Four main faiths hold sway over much of the land mass, while other areas have descended into pre-historical animism, ill-defined blends of a number of pre-existing faiths, or nuclear stalemates.

Our 21st century world is not a good place. Beyond Britain, the world has fallen to the corruption of faith corrupted. You must know the truth they don’t want you to know.

Europe has fallen to a succession of christian fundamentalist regimes, different in name from The Path, but identical in the ferocity of their oppression. Generically, this is known as Christendom; but it bears little resemblance even to the medieval Christendom: it is far more horrific. 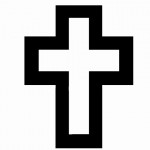 The Christian crucifix, variations of which are used by the faith-states of the new Christendom.

Following the collapse of the European Union (EU) and the United Nations (UN), as well as the shift in economic might from the West to the East, the previously-extant European nation states closed their borders, and turned inward for new direction. Inevitably, the corruption of faith, namely pseudo-Christian religions, gave rise to a new fundamentalism.

With the perceived-failure of democracy and the so-called ‘Nanny State’, widespread civil unrest at the declining standard of living and an aging population unwilling to concede wealth to the younger generations, Europe became a ticking time-bomb.

With the collapse of the Vatican following Pope Resolute I’s declaration of Catholicism as ‘Broken’, rich and politically-influential churches gained dominance and widespread popularity, eventually overthrowing the struggling democratic governments of their indigenous nation states – leading to the situation we have today.

Christendom has yet to consolidate, but we believe The Path have established communication channels with their foreign counterparts across Europe, particularly Sacrement du Gaule (formerly France-Belgium). Where this will lead, we do not yet know.

The Middle-East fell to a series of Muslim faith-states, consolidating in 2049 as Gor’ohg’ohida (أرض واحدة – ‘One Land’) – partly as a reaction to the collapse of OPEC and, in protracted form, as a hangover from the US-led ‘War on Terror’ (c. 2001).

The Crescent Moon and Star, the basis of all faith-state symbols in Gor’ohg’ohida.

From the earliest days, reports of gross human rights violations and institutional raping forced Gor’ohg’ohida to intensify its isolationism, consequently instilling a culture of fear on the world stage. Today, it is thought to be brutally intolerant, selectively-enforcing elements of Shariah law which support the current dogma.

Gor’ohg’ohida is an autocracy, although it operates a cult of personality around its many ayatollahs, caliphs and emirs that renders traditional designations useless. The precise ordering of their complex hierarchical system is not known.

Formed in 2078 by the collapse of the Far Eastern Economic Coalition, Qin-Tai Lien is, ostensibly, China (following the Popular Uprising in 2069) and the Far Eastern nation states in the wake of the 2028 Mega-Tsunami. 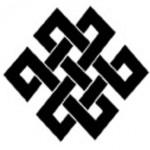 Drawing elements from Buddhist symbolism, Qin-Tai Lien is a state as much of communism as religion.

Their failure to recover, and increased dependence on aid from China, led to the spread of Communism: the Domino Effect played out in the name of Buddhist ideals.

The implosion of North Korea and the US-led failed invasion (2015) only heightened tensions, promoting consolidation to Chinese political and economic might.

The extent to which Communism has been moulded within the Buddhist mandate is unclear; militarily, however, Qin-Tai Lien remains a formidable force on the world stage.

Formerly, largely, what was India, Stan-Ra-Bhodizafa truly came into existence with the seismic shift in economic might from the West to the East. 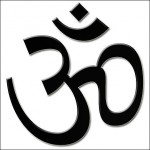 This brought a collapse in foreign aid from the West,  decimating the service and manufacturing industries India’s swelling population had come to rely on. It was an exercise in negligence by the world at large.

Since their isolationist shift towards Hinduism, the population has collapsed, causing widespread skills shortages, an inability to rebuild infrastructure and the rise of a new feudalism.

Just how they have failed to collapse internally is a source of speculation.

Some have posited divine aid and claim the appearance of the monkey god Hanuman, creating food for the masses in what Christendom would call ‘miracles’. We the Magdalenes remain unconvinced.

Russia and the US: The Eagle-Bear Stalemate 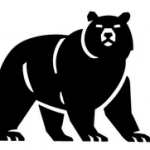 The Bear, traditional symbol for Russia.

Both Russia and the United States of America (US) have been rendered wastelands by the extensive deployment of high-yield nuclear weapons (c. 2081) following the development of the New Cold War (NCW) and the breakdown of mutual political, industrial and economic self-interest – itself following the collapse of OPEC and the shift of economic dominance from West to East.

Little is known of life in these former First-World nations, save for scant reports of a complete collapse of society. 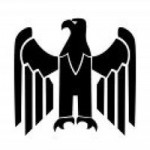 The Eagle, traditional symbol for the US.

They seem to keep each other in a state of arrested development: as soon as one gains an upper hand, the other strikes.

It is a hopeless situation with no foreseeable resolution, giving rise to a time a new idiom – the Eagle-Bear Stalemate.

Since the isolationism that had swept the world came into effect, Africa en masse returned to a new tribalism. 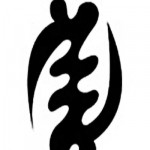 The ‘Dark Continent’ Africa, now darker than ever before.

Since then, reports of tin-pot dictatorships have started springing up with startling frequency, though each regime has proved short-lived.

Of little importance on the world stage, much of Latin America remains unchanged in fifty years, unfettered by outside interference nor of strategic, mineral or dogmatic interests from foreign states. 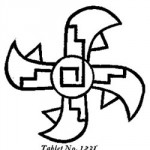 Latin America, which  has melded elements of native religions with Christianity.

It is known, however, that since the dissolution of the Catholic Church by Pope Resolute in 2063, Latin America has been the stage for a resurgence in native religions, thought to be animalistic in nature.

Infant sacrifice is a common theme, as is the building of stepped pyramids, while it is believed the populous has abandoned the ruined cities in favour of a return to rural life.

No governments, faith-based or otherwise, are known to exist.

With the failing monsoons across northern Australasia, the entire Westernised region (namely, Australia and New Zealand) imploded in an economic and agricultural collapse. 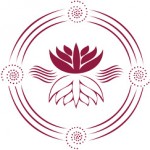 Australasia, little of which is now known.

Little is known of what – or who – remains, and few outside the region are willing to find out.

Considered by the four main faith-states and the Eagle-Bear Stalemate to be of zero political, military, economic or mineral importance, Australasia has, for all intents and purposes, ceased to exist.

Indeed, it is perceptibly considered to have never existed, so forgotten and hopeless is their plight.

Aside from the four main world faiths, it is a sad truth that the incredible array of other world belief systems that once flourished – indeed, even the absence of faith in open atheism – now appear to have been extinguished in all meaningful forms.

What exists in the hearts and minds of individuals we cannot say, but we suspect there are few who would stray from the accepted faith of their nation state, or were they to do so, only to trusted confidants.

We the Magdalenes remain faithful, for want of a better word, that faith in all forms, even the absence of faith, will one day again be an accepted foundation of freedom, and shared by all who choose it the world over.

There is life beyond The Path.  The world is proof of that.

THERE IS A FUTURE AWAY FROM THE PATH.