The truth of The Path

The Path is a militaristic, pseudo-Christian fundamentalist dictatorship, exerting a stifling stranglehold on the people of ‘Holy Britain’ in the name of oppression, ignorance, intolerance, xenophobia and above all, brutality.

They seek the ruin of all humanity. 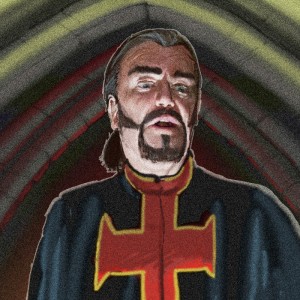 Executor of The Path, Damascus Jacobi – kill him at any cost.

Executor of The Path Damascus Jacobi, self-appointed messianic leader of The Path, has built a system of control unlike anything known to previous eras, and undoing all opposition to life away from The Path.

In him, The Path is everything – the terrible, hopeless prison of faith over freedom, of happiness in misery, of destitution over prosperity, of hatred over love. The cult of his personality is a lynchpin on which The Path, and devotion to it, is built.

Kill him at any cost.

Jacobi established the Path Political Party (PPP) to stand against the weak, democratic government and actually won in the election. The outgoing government refused to concede power – then Jacobi showed his true colours. He waged a war, with Chaplain Richards and Captain Harris leading a ground war of Heralds of The Path against a civilian population whose only crime was to resist them.

It became known as The Great Purges – a twenty-year civil war, all but lost by the freedom movement that came to be known as the Magdalenes. We live to fight on.

Holy London and the Grand Cathedral

London, decimated by The Path’s forces, was ultimately won and renamed Holy London. 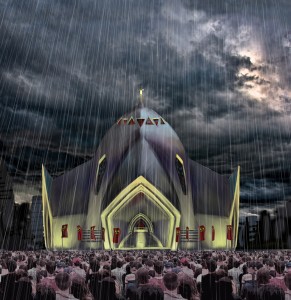 The Grand Cathedral, bastion of The Path, and potent symbol of its unrelenting tyranny.

From the ruins of London, The Path forced the construction of The Grand Cathedral, using slave labour to build from the ruins they had created.

It now rises like a terrible emblem of oppression, the focus of all the hatred masked by love, the intolerance masked by unity, the brutality masked by faith The Path in its lies and fear-mongering can muster.

And the people – Path-Walkers, broken by the faith they uphold – love them for it. They must know the truth. The Magdalenes will bring it to them – in fire if we have to.

Now The Path promulgates the belief that Holy London has always been – a bastion of faith, ordained by God himself. 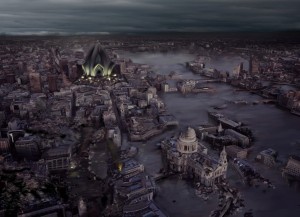 Holy London, little more than the flooded, ruined ashes of a once-great city.

It is a lie. The Great Purges were brutal, unrelenting and inhumane. Immigrants were expelled. The weak or mentally-infirm were slaughtered.

Freedom of faith, speech and the press, education, travel, social interaction and the rights of women were outlawed.

All opposition to The Path was quashed with brutal disregard for human rights or the hopes and fears of the population they sought to oppress.

There is no hope under The Path. They must be defeated.

The Protectors of The Faith

The Protectors of the Faith, ideological vanguard of The Path – and as deadly as they are devoted.

If you fight within Holy London, your greatest fear is the Protectors of the Faith – the Faith Protectorate. You are right to fear them.

They stand for more than simply oppression by brute force (we have the Iron-Clads to fear for that). The Faith Protectorate’s indoctrination is total.

Many were orphans of The Great Purges, brought up in a lifetime of deceit to love everything The Path is, and they fear and despise all thought, ambition or effort against life under the yoke of The Path.

Their devotion makes them strong, using their usually-high intellect to seek out the Magdalenes and bring down all opposition.

Crucifixion of Magdalenes is not unknown, but it is perhaps their power to indoctrinate that should be most feared.

Whatever their intentions for you, fear them at every turn.

The Heralds of The Path

If you stand against oppression on the Jericho Line or the Northern Campaigns, you will have met the Heralds of The Path. 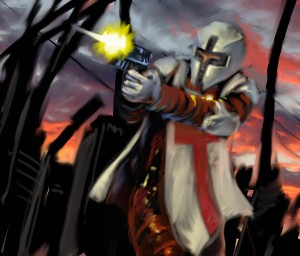 The Heralds of The Path, who have swept across Britain to instill the iron will of The Path at any cost.

Kill them on sight, and do not hesitate to use whatever tactics you must to ensure your survival. They would not offer you compassion in return.

They are a heavily armoured combined army and airforce, and deploy heavy artillery. They have also been known to use chemical and biological warfare (Sheffield, 2088), though we have undermined their supply channels. Worst, they deploy starvation tactics – surrounding whole towns and cutting off supply lines, poisoning the water supply and shelling day and night.

Their disregard for the lives of women and children is matched only by their brutality towards captured insurgents. Should they capture you, take out as many as you can – and do not tell them anything.

Die before you betray the Magdalenes.

The Iron-Clads are the brutal arm of The Path in Holy London. 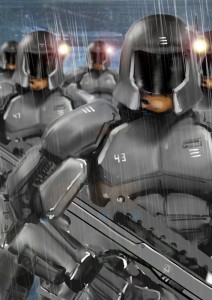 The Iron-Clads – armoured shock troops used by The Path to brutalise the people.

They are deployed for population containment, food distribution (a task they are inept at), policing the Dusk Curfew and to intimidate. Literally clad in iron, they will exterminate so-called heretics without thinking.

They are to be feared but can be more easily evaded than the Faith Protectorate.

Like all subjugated armies, it is thought that if we can bring down The Path, they will falter and surrender.

But the time for mercy for them is not yet with us. If you should come up against an Iron-Clad, flee – their heavy armour makes them less agile than the Faith Protectorate. 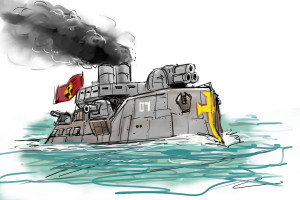 A Dreadnought frigate – used by The Path to keep its enemies out, and us in.

Naval force of The Path – dubbed the ‘Heralds of the Waves’.

For all its isolationism, The Path is acutely aware that Britain is an island bordered by navigable seas, and home to a number of deep ports and natural harbours. Indeed, many of these were the earliest targets for conquest by the Heralds, and were used with ruthless efficiency to launch sea-bound assaults to round on coastal populations.

The Falmouth Barrage and the Battle of the Forth – both assaults that saw The Path’s forces relentlessly decimate the civilian and Magdalene populations from the sea, out of range of land-to-sea artillery – stand as chilling testaments to the effectiveness of the Dreadnoughts. Both are stains on history and freedom.

Today, the Dreadnought fleet comprises of a range of ship classes, from small frigates suited to river and estuary combat, to heavily armed battlecruisers and submarines that patrol the offshore territories – possibly as a deterrent from invasion from abroad.

From land, sea and air, we Magdalenes are trapped in Britain. Nowhere is safe. We must seek freedom on our native soil.

The Nephilim of the Sword 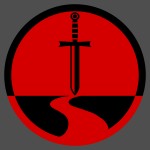 This image was leaked to us – we believe it signifies the Nephilim of the Sword, if they truly exist…

They are said to move in shadows, striking without warning, killing without compassion. Also thought to be technologically-advanced.

The location of their rumoured headquarters Aleph (possibly rendered ‘Alpha’ – ‘α’) is not known.

We believe they are nothing more than a myth promulgated by The Path for the subjugation of the people through fear: phantasms conjured to terrify.

If they are real, though, we are right to be terrified.

Don’t believe the lies The Path tells you.  Live with hope.

THE MAGDALENES FIGHT FOR FREEDOM.